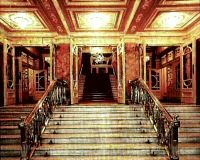 One of London's most prestigious and largest theatres.

Description: In 1870 a music hall was built here where the Duke of Argyll's residence used to be, called the Corinthian Bazaar. In 1882 it was enlarged and renamed Hengler's Circus.

In 1910 it became the Palladium and the pantomime became a British institution.

In the 1950s and 60s it was the setting for the top-rated ITV variety show Sunday Night at the London Palladium which was broadcast live every week and hosted first by Tommy Trinder.

The Beatles played here in 1963 for a television programme for an audience of over 15 million. Beatlemania ensued.

In January 1973, glam rock band Slade played a gig in the theatre which resulted in the venue's balcony nearly collapsing.