The First ever London Theatre 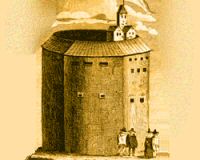 London's first ever theatre was opened here by James Burbage.

Description: This is the site of the first ever theatre in London, the forerunner of the Globe.

James Burbage's theatre of 1576 featured a troupe including William Shakespeare and some of his plays were believed to have been performed here.

After a lease dispute they knocked it down and took it to the Southbank where they built the Globe Theatre. There was another theatre opened near here the year after called The Curtain.