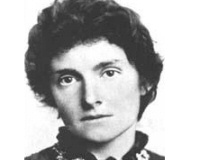 The location of the home of Railway Children author E Nesbitt

Description: In the 1890s Hubert and Edith Bland lived in a house here (now the Stratfield House flats) called Three Gables, which was on Baring Road close to the junction with Coopers Lane.

Edith Bland was better known as E. Nesbitt the authoress of The Railway Children.

In 1879 Edith moved to Blackheath, 16 Dartmouth Row and married Hubert Bland in 1880. They moved to Lewisham where she first established herself as a writer, the period during which she met Alice Hoatson who she was later to live with them as a menage a trois.

In 1894 they moved to Three Gables in Baring Road, it backs on to the railway line running between Hither Green and Grove Park.

There is a footpath beside the house, which was renamed The Railway Children Walk in 1996.

She was a founding member of the Fabian Society in the 1890s, and did charity work among the poor of Deptford.