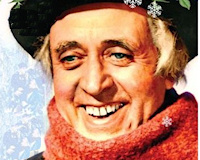 This is where comedy actor Alastair Sim lived.

Sim acted in the first Ealing Comedy, Hue and Cry, in 1946 and continued to appear in many films throughout the 1950s; including the films for which he is perhaps best remembered, The Happiest Days of Your Life (1950) with Margaret Rutherford, Scrooge (1951), The Belles of St Trinianâs (1954) and Blue Murder at St Trinianâs (1957), in which he played the headmistress Miss Fritton.

He was offered a knighthood but declined it on the grounds that he did not wish to be called Sir Alastair.