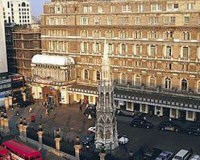 The lost luggage dept found a trunk with the remains of a woman.

Description: On 10th May 1927 staff here at Charing Cross railway station in London noticed an unpleasant smell in the left luggage department where they found the dismembered body of a woman in a locked trunk. After an investigation it proved to be Mrs Minnie Bonati, wife of an Italian waiter who had not been seen for months after being employed as a cook for Mr and Mrs Holt in Tregunter Road, Chelsea.

The very public investigation drew many leads and many dead ends until the spotlight fell upon a John Robinson after someone identified the trunk as being outside his office before she went missing.

After his arrest he admitted to that after an altercation she had banged her head and he left. But was surprised she was still there the following day and quite dead. He then cut her up and disposed of her as described.

He was sentenced to death and executed at Pentonville on August 27th.