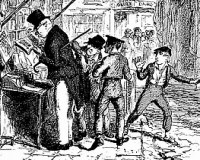 Where Lazarus Isaacs stole stole socks and sent to Australia.

Description: This is where the 20 year old Lazarus Isaacs in April 1793 stole 6 shillings and 6 pence (six and six) worth of stockings in Tower Street and upon conviction transported to Australia for seven years.

The proceedings of the Old Bailey detail the evidence of four witnesses again poor Lazarus. One of them, Peter Kerle, gave this testimony: 'I am a lighterman by trade. On Friday evening, about seven or eight o'clock, I was coming up Tower Street, I heard the cry of stop thief, the prisoner came running down the street, and I stopped him, and just before I stopped him, I saw him drop something from under his pocket . . . he attempted to get away from me, he dragged me seven or eight yards, but I held him pretty fast.'