The Horn and Centre Page 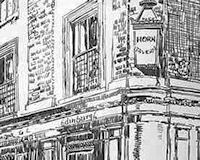 Description: Recently rebranded as The Centre Page, this historic boozer is really called The Horn. Samuel Pepys wrote about the Horn Tavern in The Complete diary of Samuel Pepys, dated 13th April 1663.

It's also been mentioned that Guy Fawkes had many a meeting within the cellar walls of the then 'Horn Coffee House'.

Charles Dickens immortalised it as The Horn Coffee House was mentioned in Pickwick Papers, when Mr Pickwick's friends Winkle, Snodgrass and Tupman visited him in Fleet Prison. 'To these succeeded a bottle or two of very good wine, for which a messenger was dispatched by Mr. Pickwick to the Horn Coffee House in Doctor's Common. The bottle or two indeed might be more properly described as a bottle or six, for by the time it was drunk the bell began to ring for strangers to withdraw.'

The Horn was partially destroyed by the Great Fire of London, and somehow survived the Blitz. After a threat of demolition in 1967 a campaign was formed and the decision was upheld to keep one of the oldest surviving Alehouses of London.