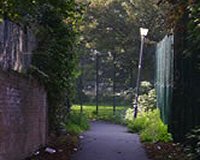 The Field of Forty Footsteps», 6.7km