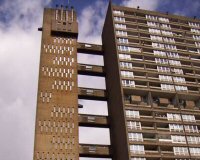 The Ugliest Building in London», 9.8km

Architecture Not To Be Missed», 10.km