The Grenadier and it's Ghosts 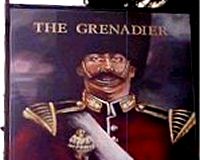 The ghost of a young guards officer who was killed in a scuffle.

Description: One of the most famous haunted pubs in the world. The main attraction is the ghost of a young guards officer who was killed in a scuffle (or by flogging - there are two tales) following the discovery that he was cheating at cards.

He tends to turn up in September (round about the anniversary of his death) whereupon there's plenty of poltergeist activity.

The Inn was originally the Duke of Wellington's officers mess, and directly outside in the old Barrack Yard is the remaining stone of the Duke's mounting block, whilst an archway nearby forms part of his stables.