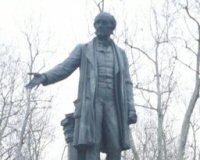 This is the location of William Gladstone's redhanded statue.

Description: This statue here of the Prime Minister William Gladstone was donated by Theodore Bryant (of Bryant's matches fame).

The Bryant & May factory nearby was notorious for the illnesses induced from phosporous poisoning (phossy jaw). Many workers died and this is why the hands of this statue of Gladstone are painted red - the blood of the workers was on the hands of the owner.

An Argument about a Brown Dog», 6.6km