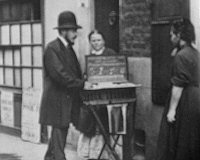 This is where crazy Dr Jelley's surgery used to be.

Description: This is where Dr Henry Percy Jelley ran a hospital for the working class folk of Hackney and Homerton.

He was born in 1866 in Devon, studied medicine in Edinburgh, and opened his surgery here in 1911.

In an age when the poor could barely afford to visit the doctors and there was no health insurance, Dr Jelley provided an amazing service to locals. He would charge very little but would dispense rememdies and drugs and advice in a matter of seconds to hundreds of visitors.

He was called the threepenny doctor and boasted of being able to treat over 100 patients an hour!

He was an eccentric and much loved part of the East End, and ther are many stories of his exuberance.

He would ride around Hackney in his horse and cart with a sign offering 50 to any girl who would marry his son.

Because sometimes his diagnoses and remedies were a bit dubious (you've got a female boil there thats got to be got rid of - the mail boils are chasing it all around your body), he did spend time in prison for an illegal abortion.

He was much loved by the locals.


1» My grandmother used to tell me of Dr Jelly and how he shouted at her from across the street to cover her chest because THATS why she was so sickly! She was a girl of about 13 and was mortified! (Brenda)
Posted by Brenda on 2011-09-29