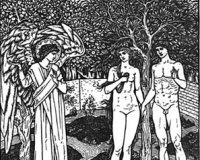 This is where the first press was set up in Fleet Street.

Description: Wynkyn de Worde studied under William Caxton who set up the first printing press in England. After William Caxton's death, Wynkyn (great name) decided to move himself across London to Fleet Street around the year 1500.

In effect he became the first printer to base himself in Fleet Street, and thus becomes the father of the British press.

De Worde was the first to use italic type (1528) and Hebrew and Arabic characters (1524) in English books; and his 1495 version of Polychronicon by Ranulf Higdon was the first English work to use movable type to print music.

The shop of Ignatius Sancho», 2.0km