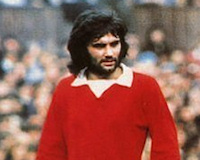 The former home of George Best and Lady Wilde.

The former Manchester United footballer could often be found between here and the Phene Arms round the corner.

Lady Jane Francesca Wilde, Oscar Wilde's mother, and a poet and essayist in her own right, was a previous tenant here a century previous.