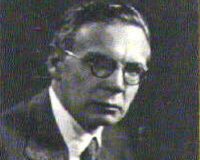 This is where science fiction author Charles Williams was born.

He was educated at St. Alban's School and at University College, London.

In 1912 he published his first book of verse, The Silver Stair, and, for the next thirty-three years, wrote, lectured and conversed with a tireless and brilliant energy. In that time he produced, apart from anthologies, a number of prefaces, and a rarely interrupted series of reviews, over thirty volumes of poetry, plays, literary criticism, fiction, biography, and theological argument.

Some of his best known novels are War in Heaven (1930), Descent into Hell (1937), and All Hallows' Eve (1945). T. S. Eliot, who wrote an introduction for the last of these, described Williams novels as supernatural thrillers because they explore the sacramental intersection of the physical with the spiritual while also examining the ways in which power, even spiritual power, can corrupt as well as sanctify. All of Williams fantasies, unlike those of J. R. R. Tolkien and most of those of C. S. Lewis, are set in the contemporary world.