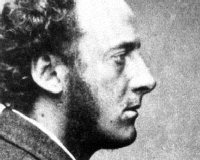 This is where prolific artist Millais lived and died.

Description: By the 1870s Sir John Everett Millais 1829-1896) was the most successful artist in Britain, earning an impressive 30,000 annually and gaining international stature through exposure at a succession of Worlds Fairs.

In 1877 he moved here where, in a specially designed commodious studio, he expanded his portrait practice and his claim to be the painter of the Empire, despite a notable absence of many royal commissions.

His overall output was extraordinary in 1881, for example, he showed eight works at the Royal Academy, and nearby on Bond Street two at the rival Grosvenor Gallery, and nineteen in a novel solo exhibition at the Fine Art Society.

Portraiture was both the engine of his prosperity and a marker of his artistic success. It allowed him to spend much of the autumn and winter in increasingly lavish rented lodges in Perthshire and to support his family of eight children in fine style.

Millaiss sitters included Britains eminent and powerful politicians, poets and writers, his female artistic friends whom he often painted as gifts, and members of the rising middle class who looked to traditions from the past to enhance their social standing. In their fashion sense, drama, lighting, energetic gazes, and evocative technique based on a study of earlier artists, Millaiss portraits successfully captured this period when the British Empire was at its most extensive and apparently unassailable.

The Courtauld Institute of Art», 2.9km