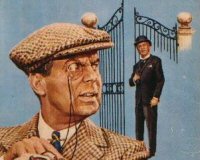 This is where Jeeves & Wooster author PG Wodehouse lived.

Description: This is the Grade II listed building where Jeeves and Wooster author Wodehouse lived between 1927 and 1934. He lived with his wife Ethel and step-daughter Leonora when it used to be called Norfolk Street.

In 1988 a plaque was unveiled here by HM the Queen Mother, who said:

The plaque reads:
I am particularly pleased to have been invited to unveil this plaque as for many years I have been an ardent reader of PG Wodehouse. Indeed, I am proud to say that his very first book The Pothunters was dedicated by him to members of my family.
Sir Pelham Wodehouse succeeded in the great ambition of so many novelists: not only has he brought new words and expressions into the English language but he has also created characters whose names have become household words Jeeves and Bertie, Lord Emsworth and his prize pig, the Empress of Blandings, and even Aunt Agatha to name but a few, live on as immortal characters.
Nevertheless I think that Wodehouse's greatest gift is that 50 or 60 years after many of his books were written they still make us all laugh, and I am sure that generations to come will continue to laugh at them just as much as we have done. What an encouraging thought for the future!
PG Wodehouse lived in this house from 1927 until 1934, and I am delighted to unveil the plaque which now records this.

The penthouse was sold here for ÃÂ£3.1m in 2006 and fashion designer Alexander McQueen bought much of the lower floors here in 2008 a few years before he died.