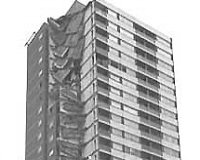 This is where the Ronan Point tower block collapsed.

In 1986 all 9 of the Freemasons Estate towers were demolished and subsequently replaced with the sensible terraced housing you see here today.

At 5.45am on 16 May 1968, fifty-two year old Ivy Hodge decided to make an early morning cuppa. She struck a match and set off a gas explosion which resulted in the collapse of one corner of her 20 storey tower block, Ronan Point. She survived but 4 others died as her south east corner of the block collapsed from the top to the ground.

Although Ronan Point was repaired (it was careless building work rather than a design fault that cause the catastrophic collapse) it was the beginning of the end for high rise system built blocks.

Because the building had just opened, three of the four flats immediately above Miss Hodge's were unoccupied. Out of the 260 residents of the building, four people were immediately killed in the collapse, and seventeen were injured, including a young mother who was stranded on a narrow ledge when the rest of her living room disappeared. Miss Hodge survived, despite being blown across the room by the explosion - as did her gas stove, which she took to her new address after the explosion.


Credits: Thanks to Rod James for an update. 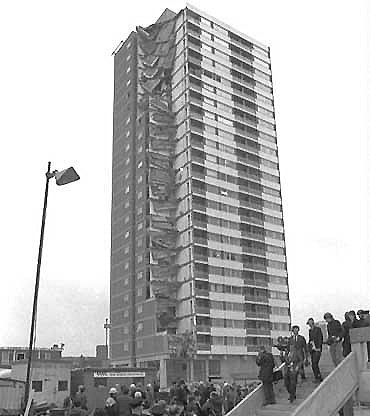 1» This is very interesting however I thought Ronan Point was actually closer to Butchers Road and near Hooper Road. Whereabouts is the blue plaque? (Eileen)
Posted by Eileen on 2008-05-13