Sleep in a Courthouse 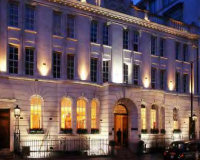 This hotel used to be a courthouse and saw many odd cases!

Description: The Courthouse Hotel Kempinski is situated in an old courthouse, the Grade II listed building retains much of the splendour of the original, with a number of quirky features.

The old Magistrates Court set the scene for many famous cases over the years, which were either heard there or taken to full trial at Crown Courts such as the Old Bailey.

This was the case with the first obscenity trial for a comic book in English history, against International Times in 1971. John Lennons sensational court case regarding the sale of sexually explicit lithograph drawings was thrown out on a technicality in 1970, and Mick Jagger spent time here defending his name when it was alleged he was caught in possession of cannabis (and Marianne Faithful!).

Keith Richards received a 205 fine here in 1973 for possession of marijuana, heroin and mandrax, as well as a Smith and Wesson revolver and an antique shotgun, both held without a licence. Oscar Wilde also had the start of his Queensbury case heard in the building.

Many remnants of this time have been incorporated into the buildings current scheme. Original Robert Adams fireplaces adorn some of the suites, and The Bars private tables are actually inside three of the original prison cells.

Silk, the hotels destination restaurant, is the old Number One court where the Judges bench, witness stand and dock take centre stage. Elsewhere in the hotel, glimpses of former use can be seen such as the iron bars that separate the lobby lounge from the Bar.

Sleep in a Courthouse», 0km

Home of the Tichborne Claimant», 2.6km

The Royal Courts of Justice», 1.1km