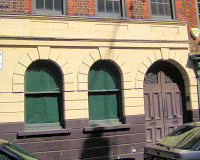 This is the fascinating silk weaver's house - scene of a mystery

Built in 1719 this 'brick messuage' became the home of the Ogier family, who had escaped from persecution in France. They entered the silk weaving trade and prospered mightily.

As most Huguenots moved on, the elegant Georgian houses were sub-divided into lodgings and workshops. At 19 Princelet Street the attic windows were altered to let in more light for weavers to work, but later occupants of the house followed other trades and professions, including Mrs Mary Ellen Hawkins who used it as an industrial school, and Isaiah Woodcock who was a carver and gilder.

The Irish came, and later the Jewish emigrants from Eastern Europe. One little group of early arrivals, mostly from Poland, formed the Loyal United Friends Friendly Society to help newcomers, just as the Huguenots had pioneered such self-help groups in the late 17th and 18th centuries. They took a lease on 19 Princelet Street.

In the garden where the Ogier children once played, in 1869 the Jews erected a synagogue. Underneath the synagogue, they created a place where people came together, and - much later - prepared to fight together, against intolerance and fascism.

And 100 years later, up in the third floor attics, in 1969 a recluse, David Rodinsky, locked his door and disappeared.

Today 19 Princelet Street is the only cultural institution in Europe dedicated to themes of immigration and diversity. It's also known as the Museum of Immigration and Diversity.

Sadly, it's not often open to visit due to the fragility of the structure it only opens for a few days each year.