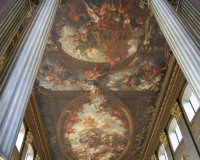 This is probably the finest dining hall in the World.

Description: This is probably the finest dining hall in the Western world, decorated with stunning paintings by James Thornhill, and is part of the King William Court.

Wren submitted the designs in 1698, and the roof and the dome above were already in place five years later. Thornhill's decoration, by contrast, took nineteen years to complete. For his 'great and laborious undertaking' Thornhill was paid by the yard and eventually knighted. While Thornhill worked, more and more pensioners were coming to Greenwich.

Pensioners could not eat in the Hall while he was working and it was both too grand and too much of a tourist attraction when finished.

The Painted Hall stood empty until January 1806, when the body of Admiral Lord Nelson was brought here to lie in state: he had been killed at the moment of his victory over Napoleon's fleet at Cape Trafalgar.

In 1824 the Hall became the 'National Gallery of Naval Art' or Naval Gallery for short and remained so until 1930s, when its contents were transferred to the newly created National Maritime Museum. By 1939 the Painted Hall was once again in use as a dining room. It remained in daily use until the Royal Navy's departure in 1998. Today visitors share it again during the day as do those who come to special evening events to eat in 'the finest dining hall in Europe'. 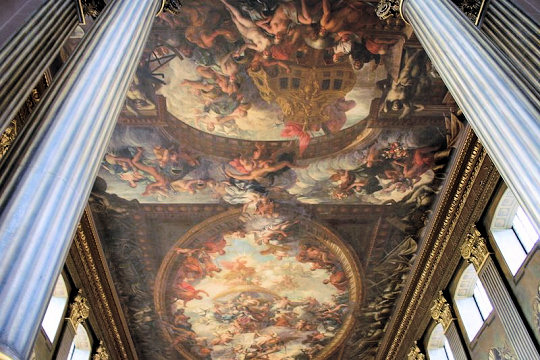 Bridge That Curls Up Into a Ball», 8.2km