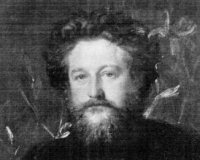 The place where the young William Morris was tutored.

Description: This is where the Reverend F.B.Guy lived and where he privately tutored the young William Morris prior to his term at Oxford in 1851. They remained friends thereafter, and Morris later designed a new banner for Forest School which was presented to the headmaster in 1879, and which is still on display at the south end of the dining hall there.