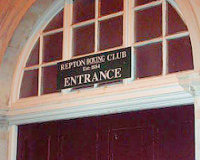 According to Mad Frankie Fraser, Foreman and several others were involved in the kidnap-murder of Ginger Marks outside this club in January 1965 after he and jewel thief Jimmy Evans had ambushed Foreman's brother George, who had been having an affair with Marks' wife. George had been shot him in the groin after luring him out onto the balcony of his South Lambeth apartment. Although Foreman attempted to lure both men into the open on the pretence of joining him on a jewel heist, Evans was able to escape by hiding under a parked car and would later testify against him for Marks' murder in November 1975.

Although he was acquitted of murder charges, he did later admit to murdering Marks with Alfie Gerrard.