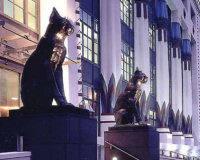 Description: Don Jose Carreras Ferrer, a Spanish nobleman moved to London in the early 1820's and started trading in cigars with members of Victorian society, including the 3rd Earl of Craven. In 1866 Carreras received a Royal Warrant from the Price of Wales, HRH King of Spain and the Duke of Saxe-Coburg-Gotha.

The Carreras Company logo was a Black Cat, while the Black Cat cigarette was introduced in 1904.

Construction on their new factory here started in 1926, that became known as The Black Cat Factory opened in November 1928.

The discovery of Tutankhamens tomb in the 1920 and the temple of Bubastis (the cat-headed goddess) inspired the unusual design. It had two 7ft high bronze cats that guarded the main entrance, and ten black cats molded into facade and Egyptian style pillars.

Carreras sold the factory to developers due to a fall in profits in 1959, and it underwent major reconstruction and re-opened in 1963 as the Greater London House with many of the decorative features removed. It was restored in 1999, to its former art deco grandeur and reinstated it as an architectural icon and enigma to 1930's design. 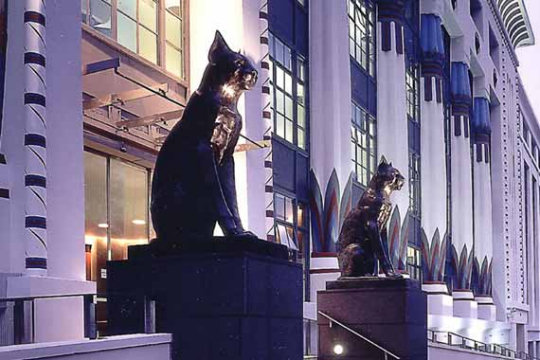 1» Is this the only location of the Black Cat Cigarette factory? I heard of another location near Lewisham. (Cherry)
Posted by Cherry on 2009-04-10


Architecture Not To Be Missed», 6.2km