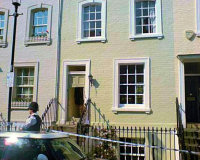 This is where Mark Saunders held a 5 hour siege with police.

Description: This is where on the 6th May 2008 a barrister was shot dead by armed police unit CO19 after a 5 hour siege and stand off. Police stormed the house and found the shooter had been shot (and killed) during the engagement.

After the third bout of gunfire, police stormed the flat after apparently using stun grenades. Eyewitnesses reported seeing green flashes and hearing several loud bangs before the police went in.

Saunders was pronounced dead at the scene shortly after 9.30pm. It was understood he did not shoot himself but was killed by an officer.

The Independent Police Complaints Commission (IPCC) has opened an investigation into his death.