The Duke of Albany 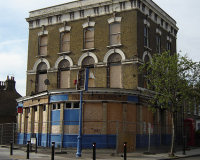 The exterior of The Winchester from Shaun of the Dead.

Description: This rough old hardcore Millwall boozer is due to be closed soon to be replaced by flats. It's also the exteterior location for the The Winchester pub from Simon Pegg's film Shaun of the Dead. He says We actually had to put new glass in the windows as there were so few unboarded up windows. During filming the landlord kept it open all night for the crew, and I remember drinking a pint at 5am having just wrestled a zombie. That was a good pint.