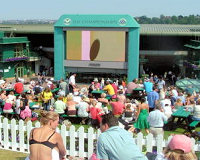 The site of British tennis' futile hopes of Wimbledon success!

Description: Henman Hill is an inclined area in the grounds of the All England Club where the Wimbledon tennis championships are annually held.

The area is officially known as Aorangi Terrace and is named after Aorangi Park, the London New Zealand Rugby Club's ground which was situated on the site until 1981.

Briefly it was called Rusedski Ridge after Greg Rusedski, and recently we've seen it tentatively re-christened Murray Mound, Mount Murray and Murrayfield (in reference to the stadium in Edinburgh under the same name).

The Lord Derby and Football», 13.km