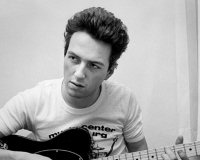 Description: This is the house that was rented by a bunch of art students in Spring 1971. Then known as Johnny 'Woody' Mellor, he and 3 friends shared a flat here.

According to Strummer's biography by Chris Salewicz Strummer named the house 'Vomit Heights' due to the sie effects of the narcotics consumed here. Tymon Dogg.

Later they told the biographer they were nightmare tenants playing music loud until 3-4am, and including an episode where Strummer was banging dustbin lids together in the early hours to keep the others partying.

Friend Deborah Karton claimed it was called Vomit Heights because of the line in a song Strumemr wrote with Tymon Dogg, who later moved in to the house here.