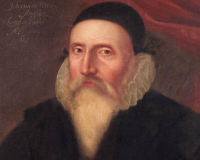 This is where medieval occultist John Dee lived

Hee had a very cleare rosie complexiona long beard as white as milke. A very handsome manhe was tall and slender. He wore a gowne like an artists gowne, with hanging sleeves, and a slitt. A mighty good man he was.

Dr John Dee (1527 to 1608) lived here at Mortlake from 1565 to 1595 except for the 6 years between 1583 and 1589 when he was travelling in Europe. He was a faithful friend, astrologer and alchemist to Queen Elizabeth and had been taken into her service almost immediately after her accession. His house by the river at Mortlake was often visited by her when she was travelling to and from Richmond. He was also summoned to court, at Richmond, Windsor or elsewhere whenever Elizabeth required his advice.

On 16th March 1575, Elizabeth arrived at Dees house and found that his first wife had died and was to be buried that day. The queen refused to enter the house and talked to Dee by the church wall. In November 1577, Dee was summoned to Windsor where the court were worried by the sudden appearance of a comet.

Dr Bayly, the queens physician consulted Dee on 16th October 1578 about her Majesties grievous pangs and pains by reason of toothake and the rheume etc from which the queen was suffering. A month later, when she was no better, Dee was sent to Germany to consult other physicians.

Another visit was paid to Mortlake on 17th September 1580 and on 3rd October, Dee went to Richmond as Elizabeth had asked him to find out what lands such as Greenland and Newfoundland she was entitled to call hers. Again, on the afternoon of 10th October, the queen called at Mortlake to offer Dee her condolences as his mother had died that morning.

On her way from Richmond to dine with Secretary Walsingham at Barn Elms on 11th February 1583, Elizabeth again called on Dee. The following year, she visited Dee at Mortlake when on her way from Greenwich to Syon. In 1585, Dee went abroad, but was called back by Elizabeth in 1589 when he had an audience with her at Richmond on 19th December. His house at Mortlake had been broken into and some of his books and furniture damaged.

Dee lived at his mother's house in Mortlake from the 1560s and continued after her death in 1579. Here he had an observatory and laboratory and added numerous rooms for his laboratories and library. The house was on the north side of Mortlake High Street, across from and a bit to the west of the Church of St. Mary the Virgin. The space between the High Street and the river is narrow and houses there generally had gardens on the other side of the road.

In about 1619, Dee's entire estate was purchased for the Mortlake Tapestry Works, who have a plaque on the wall here.