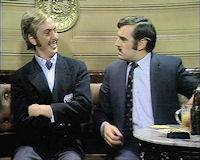 The location of the Nudge Nudge Wink Wink sketch.

Description: This weird Indian restaurant was until 2006 a pleasant pub called The Torrington.

The sketch featured Eric Idle and Terry Jones as two strangers who meet in a pub. Idle (playing a young man) asks Jones (the elder chap) several questions about his relationship with his wife, all bearing questionable sexual innuendo (Does your wife 'go'?, is she a sport?, is she interested in photography?, etc.).

Jones responds in a confused, non-committal sort of way, and Idle responds with an enthusiastic Nudge, Nudge, Say no more. The punchline of course being that after a period of time, Jones demands to know what Idle is talking about.

Idle then asks if Jones has slept with a lady and Jones replies that he has, and Idle, fascinated, asks What's it like?

Cooper always won them over», 7.6km