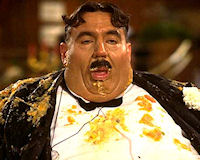 Ths location of the Mr Creosote sketch from The Meaning of Life.

Description: The Porchester Hall was opened in 1929 alongside the Turkish Baths and Library on Porchester Road. It provided the Borough of Paddington with a dignified Public Hall intended primarily for use by the residents in the area, its beauty and convenience proving to appeal to a wider circle.

The Hall was available for concerts, whist drives, banquets, dances, receptions and meetings. The foundation stone was laid by the Mayor Leonard Snell, JP, and this can be found at the Halls main entrance.

It is however more infamous for being the location where Monty Python's most memorable sketch in 1983's The Meaning of Life was filmed. It was here that Mr Creosote made an impression after that fatal last waffer-thin mint!

The Goons and Finnegan», 2.7km

Downstairs at the King's Head», 4.9km