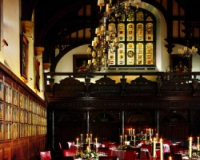 This is where The Comedy of Errors was first performed.

Description: This is the fabulous Gray's Inn Hall where it is recorded that the first ever performance of William Shakespeare's The Comedy of Errors took place.

A company of base and common fellows, is mentioned in the Gesta Grayorum (The Deeds of Gray) as having occurred in Gray's Inn Hall on Dec. 28, 1594.

Queen Elizabeth I was a regular visitor, as was Francis Bacon.

The impressive and ancient chestnut screen here is reputed to come from one of the 1588 Spanish Armada ships.

Matinee With A Difference», 0.5km