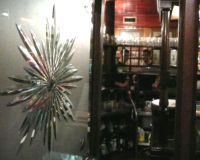 One of the few Victorian pubs with 'snob screens'.

Description: The Lamb was built in 1729 and the pub and the street were named after William Lamb who had erected a water conduit along the street in 1577.

The Lamb was refurbished in the Victorian era and is one of the few remaining pubs with 'snob screens' which prevented the well to do drinker having to see the common man drinking in the bar, and vice versa.

The Lamb found fame as a theatrical haunt when the A-list included Sir Henry Irving and stars of music hall; they're commemorated in vintage photos, surrounded by well-worn seats, much polished wood and a few vintage knick-knacks.

A Polyphon, a kind of Victorian jukebox, occupies one corner, and by all accounts it still works.

Author Charles Dickens who lived locally is reputed to have frequented the Lamb.