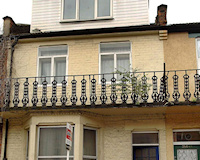 Description: This is the flat where in 2009 three men plotted an atrocity that was intended to eclipse 9/11 by downing cross atlantic planes via explosive devices.

They paid 138,000 for the re-possessed address, and were in the process of converting it into a bomb factory when police struck.

When officers searched the kitchen they found empty bottles of Oasis and Lucozade intended as the containers for liquid bombs to be detonated in mid-air over American cities.

The contents of the bottles had been carefully emptied through tiny circular holes drilled in their base so the bottles' seal caps would not be disturbed.