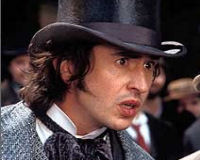 This is where fictional balloonist Phileas Fogg lived.

Description: Author Jules Verne wrote in Around the World in Eighty Days, Mr. Phileas Fogg lived, in 1872, at No. 7, Saville Row, Burlington Gardens, the house in which Sheridan died in 1814.

Despite his wealth, which is of unknown origin, Mr. Fogg, whose countenance is described as repose in action, lives a modest life with habits carried out with mathematical precision. As is noted in the first chapter, very little can be said about Mr. Fogg's social life other than that he is a member of the Reform Club. Having dismissed his former valet, James Foster, for bringing him shaving water at 84 degrees Fahrenheit rather than the regular 86, Mr. Fogg hires the Frenchman Passepartout, of around 30 years of age, as a replacement.

Jules Verneâs career as a novelist began in 1863, when he struck a new vein in fictionâstories that combined popular science and exploration. In Around the World in Eighty Days, Phileas Fogg rashly bets his companions Â£20,000 that he can travel around the entire globe in just eighty daysâand he is determined not to lose. Breaking the well-established routine of his daily life, the reserved Englishman immediately sets off for Dover, accompanied by his hot- blooded French manservant, Passepartout. Traveling by train, steamship, sailboat, sledge, and even elephant, they must overcome storms, kidnappings, natural disasters, Sioux attacks, and the dogged Inspector Fix of Scotland Yard to win the extraordinary wager. Combining exploration, adventure, and a thrilling race against time, Around the World in Eighty Days gripped audiences upon its publication and remains hugely popular to this day.

A meeting of Literary Minds», 1.1km

Chaucer Lived Over the Aldgate», 2.7km