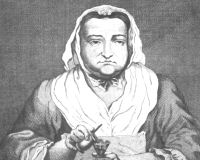 These are the houses built by Tom King's notorious Coffee Shop.

And Moll? She was Londons most famous whore. Daniel Defoe's Moll Flanders was allegedly based on Moll King. She continued to run the coffee house until around 1745, when she retired to live here in her villa. She died on 17 September 1747, leaving a large fortune.

Next door lived Sir Richard Steele, editor of The Spectator, famed for his contentious sympathies for the victims of the citys burgeoning sex industry.