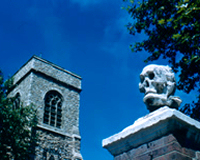 Description: St Nicholas is the patron saint of sailors. This ancient church, in existence since the 12th century, was visited by Sir Francis Drake and Captain James Cook before their world wide expeditions.

Christopher Marlowe, the 16th century playwright and spy, is buried in an unmarked grave in the cemetery here after his mysterious murder in a local tavern.

The church contains an oak panel by Grinling Gibbons, which portrays his Vision of Ezekiel and shows the prophet by the Valley of the Dry Bones. The charnel house was erected in the 1600's to prevent the nasty trend of corpse stealing.

The gateposts feature quite chilling skull and cross bones, but is it true that they inspired the first 'skull and crossbones' emblem's depicted popularly on pirate flags?