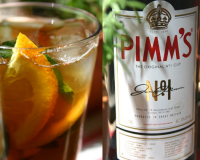 The place where summer tipple Pimm's was invented.

Description: This is where Pimms Oyster Rooms and warehouse, Pimm's Luncheon Buffet and Dining Room used to be. It's where the famous drink Pimm's originated, having been devised by James Pimm, a Kentish farmers son, in 1823.

Originally served here in a small tankard known as a No. 1 Cup. Pimm's then began large-scale production in 1851 to keep up with sales to other bars.

The distillery began selling it commercially in 1859 using hawkers on bicycles. After the Second World War, Pimm's extended their range, using a number of other spirits as bases for new cups.

The original Pimm's No 1 was made using gin, quinine and a secret mixture of herbs as an aid to digestion.