St Dunstan in the East Gardens 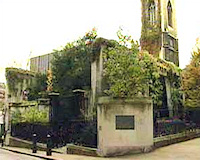 One of the best and most beautiful city gardens in London.

Description: These bombed ruins of an old medieval church and Wren Tower have been turned into a charming scene by the imaginative planting of wall chrubs and climbers and an effective fountain.

An outstanding example of a small City space, which makes the maximum use of scarce resources.

The church was built about 1100 in the gothic style. It was severely damaged in the Great Fire of London in 1666. Rather than being completely rebuilt, the damaged church was patched up between 1668 and 1671. A steeple, designed by Sir Christopher Wren, was added 30 years later. This was unusual in that Wren designed it in the gothic style, to match the old church.

There is a story that during a storm someone once hurried to tell Wren that all of his steeples had been damaged. 'Not St. Dunstan's,' he replied confidently. While German bombs destroyed the rest of the church, the steeple again proved Wren correct.

Wren's tower and steeple survived the bombs intact and now house the offices of a small health clinic. Of the rest of the church only the north and south walls remain. A lawn and trees have been planted within the ruins and a low fountain sits in the middle of the nave.

Designed by the City of London Architects and Parks Departments in 1971.

It won a Landscape Heritage Award in 1976.

Open All year daily 8am to 7pm or dusk if earlier. Admission is free.

The Museum of Garden History», 1.9km