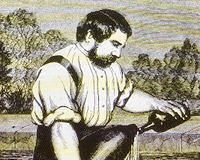 The bizarre home of Frank Buckland and his exotic eating habits.

Description: This was the home of eccentric naturalist author and surgeon Francis Trevelyan Buckland (1826-1880), or Frank Buckland as he was better known. It was this house that was famous for its menagerie and its varied dinner party menus which included such delicacies as boiled elephant trunk, rhinoceros pie, porpoise heads, and stewed mole.

His writing was much criticised for being quite rough hewn but it was always vivid and racy, and is credited in bringing natural history to a larger audience.

Animals, birds, and reptiles were to be seen everywhere; monkeys were not too troublesome, a jaguar was not too wild, snakes and glow-worms were not too
unpleasant, to be welcome in the house. Cats, rats, mice, parrots, and guinea-pigs and laughing jackasses were there as a matter of course.

Parties of New Zealanders, Zulus, and Aztecs, arrived in London, took a bee-line to 37 Albany Street. The Siamese Twins and the Two-headed Nightingale were received there as friends of the family. He also entertained 7ft 7inch Frenchman John Brice and took part in some theatrics outside here, lighting his cigar from the street lamp.

It was a happy household, and Mrs. Buckland's part may be understood in the fact that her particular pet was
the young jaguar.

Here he telles the tale of bringing a massive sturgeon back to this house:

On Tuesday evening, at 5pm, Messrs Grove, of Bond Street, sent word that they had a very fine sturgeon on their slab. Of course, I went down at once to see it... The fish measured 9 feet in length [nearly three metres]. I wanted to make a cast of the fellow... and they offered me the fish for the night: he must be back in the shop the next morning by 10 am... [various adventures follow] I was determined to get him into the kitchen somehow; so, tying a rope to his tail, I let him slide down the stone stairs by his own weight. He started all right, but 'getting way' on him, I could hold the rope no more, and away he went sliding headlong down the stairs, like an avalanche down Mont Blanc... he smashed the door open... and slid right into the kitchen... till at last he brought himself to an anchor under the kitchen table. This sudden and unexpected appearance of the armour-clad sea monster, bursting open the door... instantly created a sensation. The cook screamed, the house-maid fainted, the cat jumped on the dresser, the dog retreated behind the copper and barked, the monkeys went mad with fright, and the sedate parrot has never spoken a word since.

Once Frank's wife, Hannah Papps, was coming down the stairs early one morning when she tripped over something soft and stumbled to the bottom. Finding a light she found that it was a dead infant hippopotamus. Such was the lack of space for curio's and other material from Frank's curiosities.

This house had previously been occupied by Charles Dickens's father-in-law, Mr. Hogarth.

Death came untimely to this fine naturalist and Government Inspector of Fisheries. This was Frank Buckland's farewell note: God is so good, so very good to the little fishes, I do not believe He would let their inspector suffer shipwreck at last. I am going a long journey, where I think I shall see a great many curious animals. This journey I must go alone.