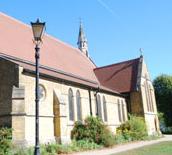 The church that heard some critical debates during the Civil War

Description: There has been a centre of Christian worship on this site from at least the 13th century. The oldest parts of the medieval church surviving today are the tower, parts of the nave arcade and the Bishop West Chapel, built in the early 16th century.

The church was substantially rebuilt in 1836. In 1973 an arson attack gutted much of the church and subsequently rebuilding wasn't completed until 1982.

The church is renowned for the debates that were held here in October 1647 during the English Civil War. Colonel Thomas Rainsborough famously warned that the 'poorest he that is in England hath a life to live, as the greatest he ... every man that is to live under a government ought first by his own consent to put himself under that government.'