The Royal Courts of Justice 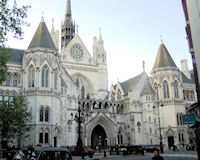 This is one of the splendid gothic sites in London.

The building is a huge grey stone Victorian Gothic style palace of buildings and was designed by George Edmund Street, who beat off 10 other leading architects.

The building was started in 1873 by Messrs. Bull & Sons of Southampton and it was officially opened by Queen Victoria in December 1882.

It took 9 years partially because of a Mason's Strike which caused a scandal when the builders brought in European builders to continue it's progress.

The courts within the building are generally open to the public although sometimes cases have restrictions.

There are over 1000 rooms and a 3 mile labyrinth of hallways.

The Great Hall is a staggeringly 82ft high, 238ft long and 48ft wide and can accommodate 600 for a dinner or 800 for a cocktail reception.


Home of the Tichborne Claimant», 3.4km

The Siege of Sidney Street», 2.4km