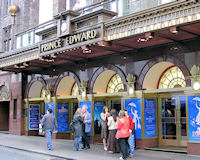 This is where Evita and Mamma Mia first premiered.

It's named after Prince Edward, Prince of Wales (later King Edward VIII), and opened on April 3rd 1930 with the musical Rio Rita.

The theatre was the scene for the sensational London debut of famed cabaret artiste Josephine Baker, who performed her famous 'Bananas Dance' right here.

In 1935, Edward Stone converted the theatre into a dance and cabaret hall, renaming it London Casino, which did well until it was badly damaged in London's worst air raid of WWII on the 10th May 1941. It did well to survive at all.

It was restored after the war becoming a veterans club, and then a cinema until it was converted back to a theatre with the world premiere of the musical Evita on 21st June 1978.

It has seen Jersey Boys, Mary Poppins and Miss Saigon since then.