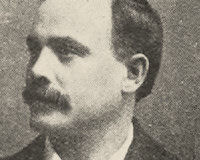 Pioneer of the Labour Party and union movement.

Description: Pete Curran was the first Labour MP elected in the North East of England, winning a by-election in Jarrow in 1907. He was a key figure in the start of the Labour Party and Trade Union movement.

He and died in this house and crowds lined the route here for his funeral to Leytonstone in 1910.

His great grandson Graham Reeve wrote the following at the centenary of his death in 2010:

Pete Curran was born in Glasgow in 1860 of Irish descent and was one of the first leaders of the Labour and Trade Union movement. He was a comrade of well known historical Labour leaders including Keir Hardie, Ramsay Macdonald and Will Thorne.

Before he became MP for Jarrow he was the National Organiser of the Gasworkers Union and the Chairman of the first Management Committee of the General Federation of Trade Unions in 1899.

Pete moved to London at about this time and worked at Woolwich Arsenal as a hammer man and became a full time union officer.

He also spent time in Plymouth where he was sentenced to 6 weeks in prison for organising a strike on behalf of the harbour workers.

He was a real socialist and pioneer and a hero in the origins of the labour movement.

He was a strong willed man, a born leader and political organiser but his achievements have largely been forgotten.