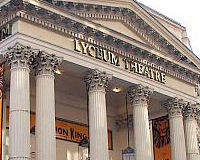 Description: This historic theatre dates back to the 18th century and was the scene of one of the very first waxwork exhibitions by Madame Tussaud.

It was almost bulldozed in 1939 but got saved by the outbreak of war, getting converted into a Mecca ballroom in 1951. After major refurbishment in 1999, the theatre has been permanent host to The Lion King.

In the 1960s and 1970s, the theatre was used as a music venue television broadcast studio. The Grateful Dead, The Groundhogs, The Clash, Bob Marley and the Wailers, Led Zeppelin, Queen, The Police, The Who, Emerson, Lake & Palmer, Colosseum, U2, The Smiths and Culture Club all played here.

Bob Marley and the Wailers recorded their Live! album here on 1819 July 1975 while Genesis filmed a performance here in May 1980 for the Old Grey Whistle Test.

U2 signed their contract with Island Records here in 1980 in the Ladies toilets! Their manager disclosed later 'we needed somewhere we could see what we were doing and the ladies was a little bit nicer than the gents.'