The Prince of Wales 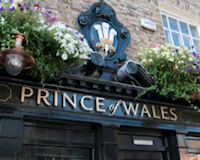 The pub frequented by Terry Jones and Python colleagues.

2. It was once run by an Arsenal footballer. Arsenal defender and Middlesex wicketkeeper Leslie Compton was landlord of the Prince of Wales sometime after leaving The Hanley Arms in 1962.

3. Comedy legend Terry Jones and his Monty Python colleagues love and frequent it. He wrote about it in Bonhams magazine in 2014:

I first went to The Prince of Wales about 10 years ago and felt at home immediately. I had just moved to Highgate from Camberwell, where I had lived for a long time, and the change was dramatic. I love real ale (and had my own brewery at one time), so finding a good local was a priority. The Prince of Wales is a typical old-fashioned boozer and hasn't changed in years. It's a wood-panelled pub, with benches under the window-sills and a few tables, just as it would have been 30 years ago: a gem. It has photographs on the walls of former inhabitants of Highgate, such as John Betjeman.

The pub's beer-keeping is questionable. They have four taps and vary three of them; Butcombe Bitter seems to be their regular ale. (They also serve Thai food, which is rather good.) This is apparently Clive Owen's favourite haunt. And Ray Davies goes there a lot. So the pub has quite a star-studded history, though that's not why I go there.

The good thing is that Terry Gilliam lives just around the corner and Michael Palin is not far away, so we can get together from time to time. The regulars are not impressed at all, which means we can just be ourselves. Not that we've done any work there, it's not that kind of place. We usually end up talking about John (Cleese) and how he never keeps in touch.

Apart from the beer, I usually go to read. I am reading David Copperfield at the moment. It's quite a brainy place. There is a pub quiz every Tuesday night, with the reputation of being the hardest in Britain; it is one of the few in which questions are compiled by the regulars. It is fiendishly difficult. Marcus Berkmann runs it and published The Prince of Wales (Highgate) Quiz Book a few years ago, and as far as I know, it is the only pub quiz immortalised in this way.

Having a four-year-old daughter, Siri, doesn't do anything for relaxation at home, so this is my alternative home from home. I usually sit under the television, which is silent except when the football is on. Best of all, I can take my Jack Russell, Nancy, with me. The pub likes dogs.