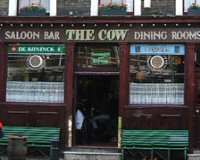 The Conran owned Irish seafood pub with the great name.

Description: This pub under the Westway was once known as the Railway Tavern, and was reputedly renamed to annoy a former landlady with attitude.

An equally plausible explanation is that drovers and their livestock passed this way headed east to London's Smithfield Market. Whatever, 'eat heartily and give the house a good name' is the sound philosophy of the pub, which specialises in oysters, Guinness and Cuban cigars.

The Cow will endure - it's owned by Tom Conran, Sir Terence's son, who also looks after the eponymous Toms, as well as the wonderful Crazy Homies and Lucky Seven diner on the same strip.

1» My nan and grandad use to own this pub would would be really interested to know some more history, especially about it being renamed to annoy the former lanlady, any imformation would be appreciated .thankyou Mrs Jacobs. (ANNA)
Posted by ANNA on 2011-08-05