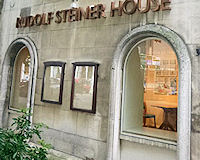 This is where Sir Alec Guinness's first show was put on.

Description: Dr. Rudolf Steiner (1861-1925) offered a comprehensive path of spiritual development and research, which, when pursued, can contribute to the creation of a more humane world.

Steiner founded the General Anthroposophical Society at Christmas 1923, as 'an association of people whose will it is to nurture the life of the soul, both in the individual and in human society, on the basis of a true knowledge of the spiritual world'.

Rudolf Steiner House and Hall today are Grade II listed and the headquarters of a movement that from the first expressed its ideology in architecture.

This building is the strongest English example of Steiner's unique architecture idiom best known at his goethenaum near Basle in Switzerland. The building stands also as an almost unique British example of the symbolic expressionism
prevalent in German art before and after the First World War.

The house was built in stages, starting with the theatre and the first floor room behind it: other rooms were added later as was the bookshop.

The theatre is where a young (and out of work) Alec Guinness struggled to find a venue to put on Great Expectations in 1939. It ran here for 6 weeks.