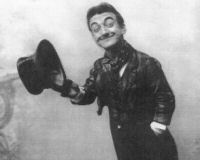 His trademarks were his miniscule height - he was only 4 feet 6 inches, and his bizarre 6 digits on each hand.

He became well known in music halls for his act involving a pair of 28 inch boots, and later appeared in pantomimes such as Humpty Dumpty and Hop o` my Thumb.

Like all the classic comedians Little Tich could walk on stage and without doing anything make people laugh instantly.

He grew up in Cudham but moved to Hendon later in life when he'd made plenty of money, and died here.