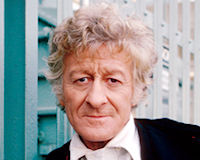 This is where the third Doctor Who lived.

The celebrated actor was much loved for his breakthrough Doctor Who role as the third Doctor in the Tardis. He also endeared himself to a generation with his role in children's tv's favourite scarecrow Worzel Gummidge.

His early career started badly with his expulsion from RADA when Sir Kenneth Barnes telling him he would never make it as an actor owing to his lisp and his bad attitude.

Pertwee served in the Navy in World War II, distinguishing himself and seeing plenty of enemy action and surviving being shot in the knees.